Once described as “ostentatious” by a local historian, 55 Campbell Street in Moruya is the pièce de résistance of the coastal town.

The affectionately dubbed ‘Lynwood’ dates back to 1914. Leading timber merchant for the South Coast, George Henry James, was appointed to Moruya in 1910 and was adamant to only have the best of the best for himself.

With the aid of a district architect and local tradesmen, he set about constructing the vast three-bedroom, two-bathroom cottage on some prime real estate near the centre of town.

Over a century later, Brian and his partner drove past in their car, noticing the ‘for sale’ sign out the front. 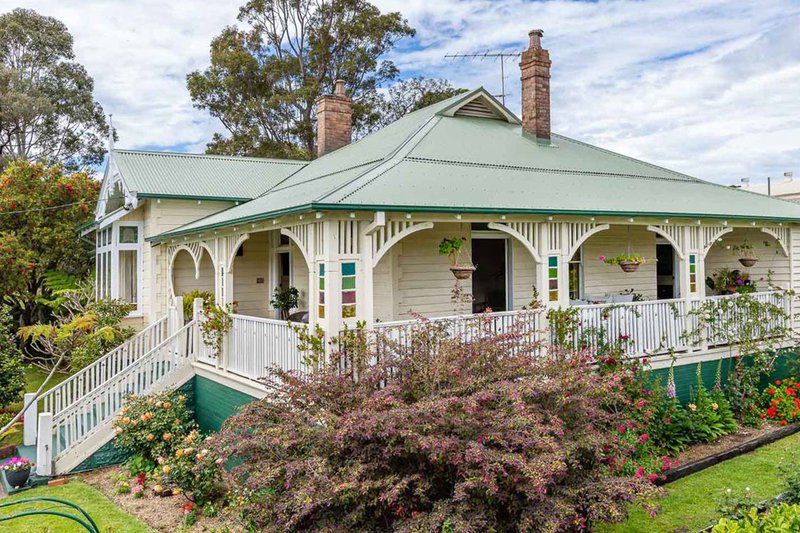 The couple lived in a Sydney apartment but regularly visited a family beach house in Broulee to break from the city and get some fresh sea breeze.

“We used to drive past this place many times going to coffee and always loved the look of it and thought how great it would be to live there,” Brian says.

On closer inspection of the property on that day in 2012, they took one look at the beautiful established gardens and the grand entrance hall with its pressed metal walls and were sold.

“End of story. It’s probably crazy coming from an apartment to what was advertised as a five-bedroom house, but we’ve had such great times here.” 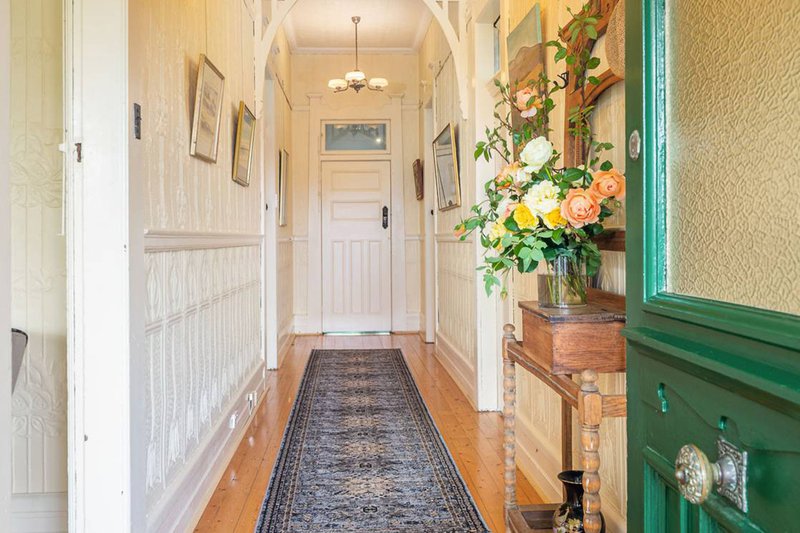 Inside the front gate is a garden filled with the beauty and scent of magnificent roses, a thick hedge providing absolute privacy and sound deadening all around.

The ‘whiplash’ arch over the entrance is a strong art-nouveau feature and combined with other handmade features, make for a very charming and sophisticated first impression.

The home also features ‘Wunderlich’ pressed metal on both the internal and external walls, which Brian describes as “a very unusual and lavish feature”.

There are also two fireplaces, one with the original handmade hearth tiles and the original copper basin in the laundry. 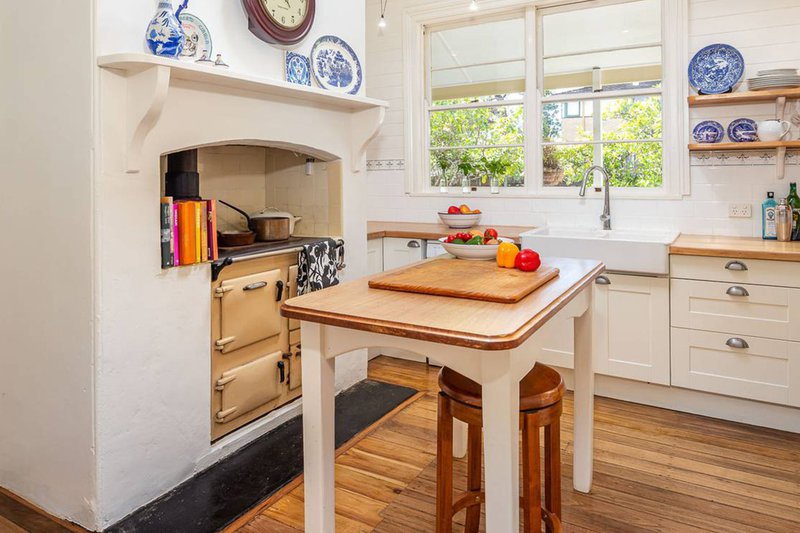 Despite the age, Brian says the entire property has been superbly maintained. The only work they’ve done has been to the kitchen and laundry, so a lot of the original features are intact.

The entrance hall is like stepping back in time, with those intricately detailed patterns on the walls and ceiling, all still softly lit with the original wall lights.

Boasting a spacious formal living and dining room, the talking point will be the original open fireplace.

“Coming from a small apartment in Sydney, the feeling of sheer space was the first that stood out to us, especially the high ceilings, big rooms,” Brian says. “It’s like living in another time – a lovely feeling.” 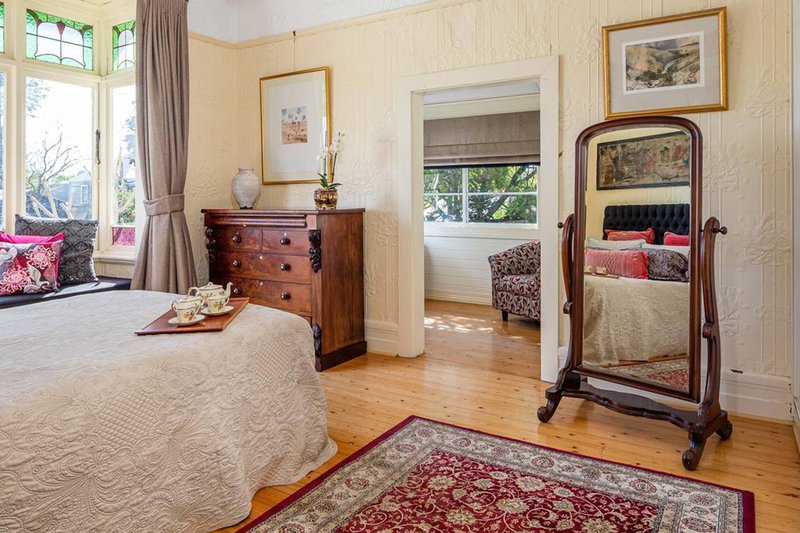 A small servery window looks into the dining room and will make entertaining a dream from the large equipped kitchen, complete with a Rayburn fuel stove. While historical, there is also the modern convenience of an electric free-standing cooker. An expansive walk-in pantry with a wall of shelving also has its own servery window.

Lovingly known as the ‘Peacock Lounge’ for obvious reasons, the second living room at the back of the home has its own built-in storage that could easily double as an additional bedroom.

The north-facing master bedroom includes an ensuite, dressing room and office, and all are naturally bright. A window seat with original stained glass overlooks the sports fields and is framed by beautiful mountain views.

The second bedroom hosts its own fireplace and door to the western part of the verandah. 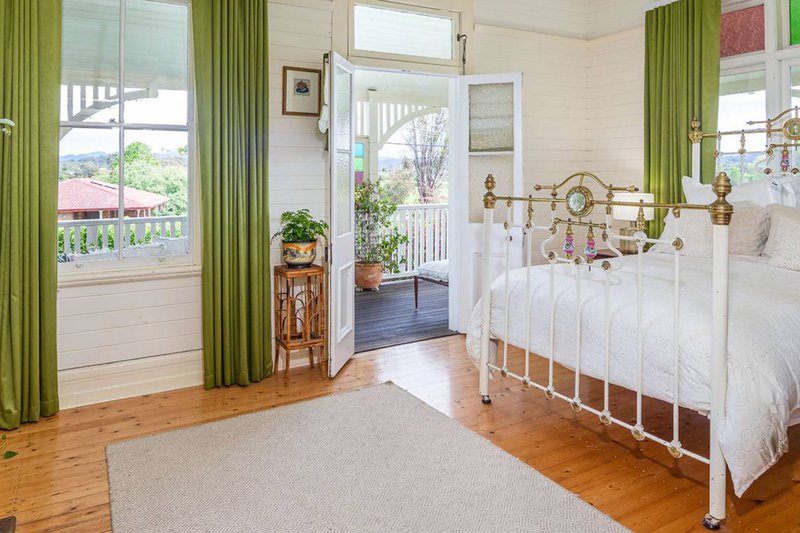 Tucked neatly away behind the laundry is the home office or art studio, with its own balcony for privacy or inspiration.

Original renewed timber floors add rich character to the home throughout. And there is always more storage space in the original heritage shed, next to the old outhouse.

“It’s something neither of us wants to do; we both love the house and have loved living in Moruya. But we’re relocating to Brisbane for family reasons.” 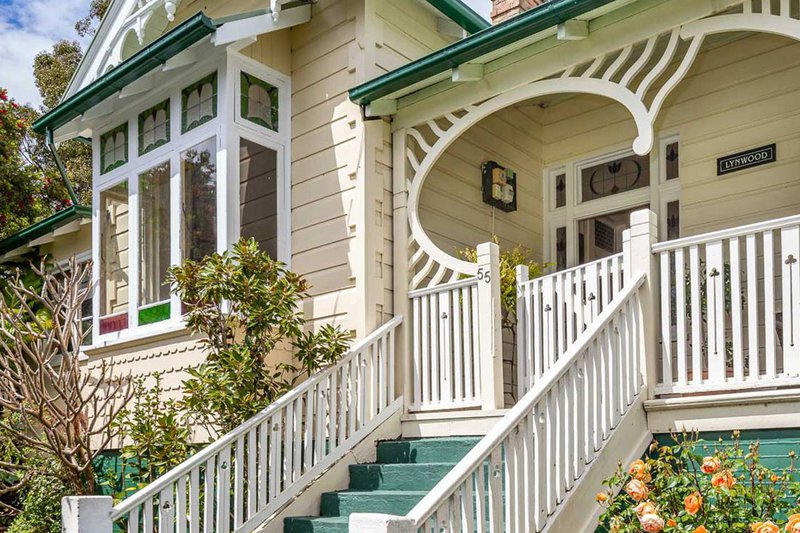 This home will be auctioned on site at 11 am on Sunday, 28 November.

*Zango is committed to continue connecting people with places safely. For the latest information, we encourage you to speak with the listed agent for the property, stay safe.